The late Mallam Aliyu Ahmad Tage has passed away after a short illness. Last year, before his death, he was telling his family that his illness was not serious. Aliyu Ahmad Tage has died of a heart attack at a hospital in Kano, according to his cousin Umar Muhammad Aliyu.

He died at the age of 55. He had 21 children, two wives, and two great Kannywood heroes. After the funeral prayers, the body was taken to Tarauni Cemetery, where it was buried according to Islamic rites.

Shortly after the burial of the late Hausa film star Alhasan Kwale, he made a brief statement, saying that the deceased before his death had declared that he would die because his illness did not go away.

Now the power of God today God has taken his property, the hero has made it more suitable for anyone who knows late is owing to him any amount of money should come to them directly to pay them off.

Since the death of the kannywood hero, they have been publishing a picture of the deceased, describing his character and the qualities he possesses and how everyone has witnessed his beauty in kannywood.

By Allah, Ahmad Tage is a man of generosity, dignity, he knows the value of people and he is not angry. Even if you commit a crime, he will be able to control his anger

We call him Baba Tage because he has many children and we live with them. I worked with him in the film industry as a photographer. He calls me by a different name. Young man.

Adama's marriage to a young woman has sparked controversy 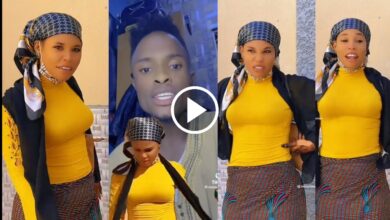